I’ve got a cute little mixed media tag for you today. We are having a green winter so far so I’m posting  this wintery project! 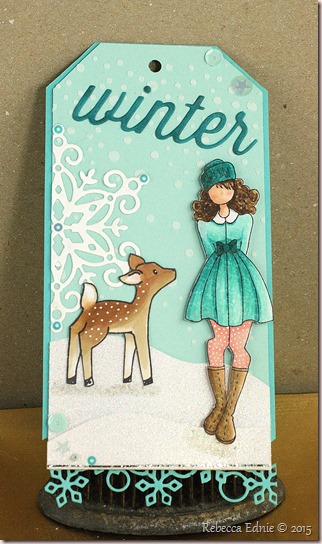 Can you believe the weather? Some parts of North America are blanketed in snow and here in Southern Ontatio, we’ve had what can only be described as a heat wave! It was 55/13 degrees here! Yet Buffalo, only a 2 hour drive away, is covered in 6’ of snow!! Yikes! Funny how some Americans think Canada only consists of the great white north!

Anyway, back to the tag! I used a Julie Nutting Doll by Prima. As much as I love the tall dolls (7” high), it was refreshing to use this smaller doll. I guess she is about 4” or less. The snowflakes were sone using a stencil and light stencil paste. The texture is lighter so the paper colour can shine through somewhat and it has a spongier, less slick surface than other pastes and will aceept ink sponged over top if that’s the look you want. I meant to add some ribbon but it always sags and messed up the photo and gets wrinnklesd in my storage box so I will wait until I plan to use it to add the ribbon. 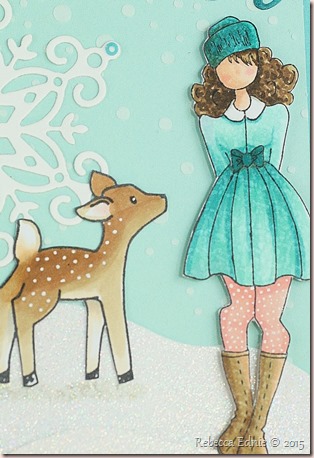 The snowbanks were hand cut and glittered using a glitter embossing powder. I added texture ot her coat/dress?, boots and hat using a textured cloth dipped in alcohol. I think the fabric looks like a sweater and the boots look like suede. Be sure to add alcohol texturing before colouring other areas or mask them off. A speckled face won’t look good! This technique can also be done with reinkers to add colour to fur or other highly textured surfaces. oh and yes, those are pink tights, not sunburnt legs! I didn’t realize until I was done that it looked like that! ha ha!!!

The border on the bottom didn’t turn out quite like I had hoped. I tried a partial die cutting technique to get the border cut along the bottom but leave it attached at the top edge. So I aligned my plates so they would only cut the bottom. I guess the die is so narrow and intricate that it didn’t work well. I would have been better off to cut it and glue it on under the top tag. Oh well, I will learn from this too!