Have you ever created a card series? It’s different than making cards assembly line though much of the process is the same. 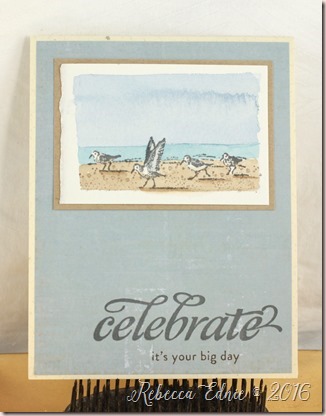 For this series, I knew I wanted to make several cards using the same water coloured panel. But first you have to decide what other elements will be the same and which will be different. I knew I wanted basically the same layout and water coloured image but different sentiments. Starting with my watercolour paper (Windsor & Newton), I cut it into the size needed for my layout and began stamping and painting my image. I used my old palette of professional paints from various manufacturers. 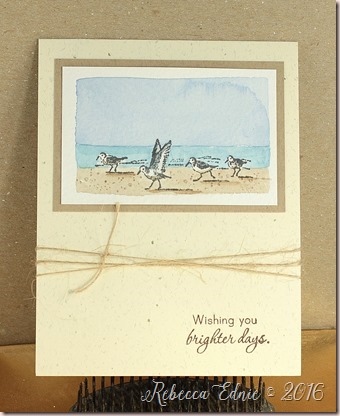 This little bird image (SU!) seems unassuming at first but comes to life with an ocean scene behind it. I deliberately didn’t tape off the edges for two reasons. Firstly the image was too small to warp too badly and secondly, I wanted the roughness of the uneven edges. In fact, there is another reason, it helps me learn more control with my brush. I didn’t mask off the horizon and beach lines for the same reason.

You might see in some images I got a nice bloom. It first, I wasn’t aiming for them but I wasn’t trying to avoid them since I think they are pretty in the right places. But once I saw how pretty they looked, I deliberately created them. To do this,  you wash in your sky and let it dry until just damp. To tell if you paper is damp, look at it at an angle to your light. The shine of the wetness of fresh paint will be gone but when you touch the paper, it still feels cool to the touch and has not dried completely. At this point, add in some more of the same paint; where the new paint touches the damp paint, it will bloom. Don’t use paint with more pigment than the original wash or it won’t work as well. 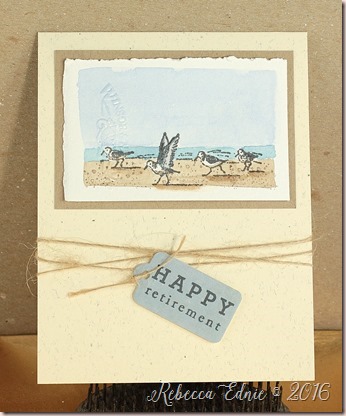 When it came time to assemble these,  I matted the image with kraft paper, my favourite for any beachy card then chose the sentiments I would use and my card base colour. I had originally planned to use different card bases but I found this colour (SU!) worked the best. I chose a sympathy die (Dee), a thanks die (SSS), a celebrate stamp (Waltzingmouse), a happy retirement stamp and a brighter days stamp (PTI). I felt like this covered many occasions that suited this image. 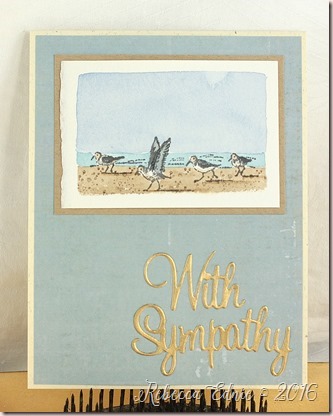 Last but not least, the embellishments I would use. Normally in my card making, patterned paper is chosen much earlier in the process. But in this case, since the design didn’t hinge on the paper, I left it until almost last. 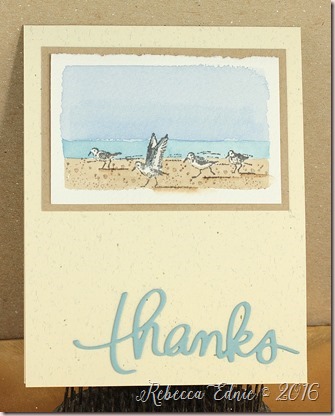 For the designs with smaller sentiments, I either put it on a tag or I added some twine to fill the empty space. In the case of the sympathy card, I had die cut the sentiment earlier in the week and wanted to use it but the gold didn’t show up well. That’s when I decided to add the patterned paper. I was using a 12×12 sheet so my cut left me with enough for a second panel so I decided to use it up.