Before I get started with my card, I wanted to mention why I’ve been behind with my promised increase in posts. We were all sick for a couple weeks. Then last Monday, we took my little 5 year old son Teddy to get some fillings done at the dentist. He isn’t able to hold still enough (has ADHD) so we opted to have general anesthetic. After 45 minutes we were surprised to have the anesthetist come out and talk to us. Teddy’s throat closed so badly that he was too unstable to take the breathing tube out. They had to transport him to hospital but we expected once there they would stabilize him quickly and he’d be fine. Nope, they had to get a specialized transport team in from the local children’s hospital and take him to yet another children’s hospital over 2.5 hours away. Turns out his lung collapsed and he ended up in ICU for a day and a half, on antibiotics and in an induced coma to allow the swelling to go down. It was terrifying. Fortunately he is better now and home but it’s been a crazy week. Hopefully I can get caught up on cards I posted to SCS and some book reviews this week!

So, on to the card. Our challenge this week was to make a bright and happy summer card! No problem. As you probably know, summer cards, especially beach ones, are my absolute favourite. I love that we have such a variety of challenges at Crazy 4 Challenges! 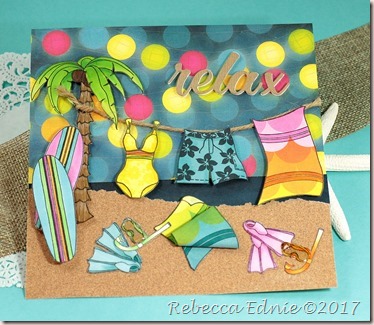 I used papers from a past Simon Card Kit to create this cute night beach scene. I was trying to make the scene appear as if lanterns were being floated through the sky while a couple relaxed on their balcony after a fun day on the water. The images were all pieced from an old Taylored Expressions set called Hanging Out Beach. The flippers and goggles were coated in Glossy Accents to make them appear like shiny, rubbery plastic. The towel stripes, bathing suit stripes and surfboards were all blinged up with a Wink of Stella pen. The sandy layer is real sand paper while the tree trunk, coconuts and sentiment were stamped on real wood veneer paper. A few touches of Copic marker gave the items colour and shading.

One fun touch I added was to carefully bend the blue-green towel using my bone folder until the fibres were softened. That way I could fold it up as if it was tossed aside casually in a lump. If I had folded it, it wouldn’t look as natural or casual. I added foam tape underneath to help support the ‘towel’ when the card is in the mail.

Come on over to our blog to be inspired by our challenge. Then pop back in after you’ve made your project so you can link it up!