Once in a while, I like to make a project other than a card for Crazy 4 Challenges. I made this mermaid a while back and started the canvas but hadn’t finished it yet. I happened to notice it right while I was deciding what to make so it worked out perfectly! 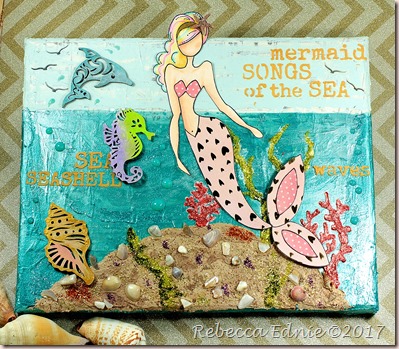 When I started, I had a slightly different plan so I covered the canvas with Tim Holtz tissue paper. Then I covered it with watered down gesso. Next I mixed up a concoction of acrylic paint and shimmer acrylic paint for the sky. The shimmer paint was old and pretty thick so it made a sort of paste so instead of painting it on, I used a palette knife. It gave me some really cool texture! I liked it so much that I repeated the technique for the sea except I added much more of the shimmer paint. For this layer I also used a palette knife to give me some texture. I deliberately applied it in wave-like motion and because I didn’t mix it completely, there is some colour variation as well especially in the lower corners. It’s subtle and didn’t show up well here because the shimmer reflects the light so strongly. 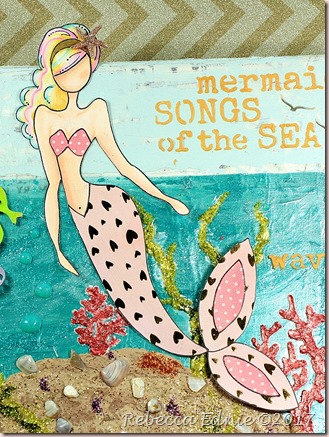 To follow the sketch I needed a half circle at the bottom so I mixed up another concoction this time with gold and buff paints, some texture paste and some gold glitter. Again, it was applied with a palette knife; I didn’t use any template, I just applied it like cake icing until I got a shape I liked. While the paste was still wet, I embedded shells, shell chips and added some more glitter; gold glitter all over and some bright colours to look like coral and little creatures sticking to the rock. Some green glitter was applied to look like sea weed as well. I liked it so much that I created a large sea weed growing off the top of the rock using texture paste and glitter. The shape I wanted was much too small for the palette knife so I used a new set of silicone tipped tools I bought.

For the corals, I used a stencil from Red Lead paper company. I tried adding pink and red glitter but I waited too long (off washing the stencil) so it was splotchy and I didn’t like the colours. So I mixed some Autumn Rose and Copper Nuvo drops and painted that over the top. I liked that so much better! I used another Red Lead stencil to add the words using gold paint mixed with light modeling paste. It kept a hint of shimmer which I liked. So much is shimmery on this canvas that this is a nice contrast.

Also to match the sketch, I added some sea creatures to the canvas. These chipboard shapes were from Michaels; I covered them with various paints. The Prima doll stamp by Julie Nutting was stamped on scrapbooking paper from Craft Smith except for the skin which was stamped on X-Press It paper and coloured with Copic markers. Last I added some Nuvo drops for bubbles, a plastic starfish to her headband and a few sea gulls in the sky.

Join us over at the C4C blog with your project featuring this fun sketch.